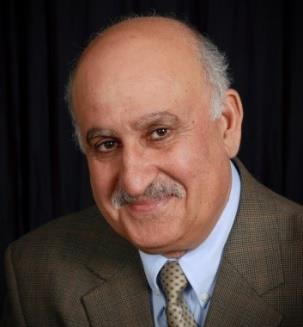 Jafar Saniie (Life Fellow, IEEE) received his B.S. degree (high honors) in electrical engineering from the University of Maryland, in 1974, the M.S. degree in biomedical engineering from Case Western Reserve University, Cleveland, Ohio, in 1977, and the Ph.D. degree in electrical engineering from Purdue University, West Lafayette, Indiana, in 1981. In 1981, he joined the Department of Applied Physics, University of Helsinki, Finland, to conduct research in photothermal and photoacoustic imaging. Since 1983, he has been with the Department of Electrical and Computer Engineering, Illinois Institute of Technology, where he is Department Chair, Filmer Endowed Chair Professor, and the Director of Embedded Computing and Signal Processing (ECASP) Research Laboratory. His research interests and activities are in ultrasonic signal and image processing, ultrasonic software-defined communications, artificial intelligence and machine learning, statistical pattern recognition, estimation and detection, data compression, time-frequency analysis, embedded digital systems, system-on-chip hardware/software co-design, Internet of Things and cybersecurity, computer vision, deep learning, and ultrasonic nondestructive testing and imaging. He has been a Technical Program Committee member of the IEEE Ultrasonics Symposium since 1987 (the Chair of the Sensors, NDE, and Industrial Applications Group, 2004–2013); an Associate Editor of the IEEE Transactions on Ultrasonics, Ferroelectrics, and Frequency Control (UFFC) since 1994; Publication Chair of the IEEE Ultrasonics Symposium (2013 and 2021); Lead Guest Editor of the IEEE Transactions on UFFC Special Issue on Ultrasonics and Ferroelectrics (August 2014); Lead Guest Editor of the IEEE Transactions on UFFC Special Issue on Novel Embedded Systems for Ultrasonic Imaging and Signal Processing (July 2012); and Lead Guest Editor of the Special Issue on Advances in Acoustic Sensing, Imaging, and Signal Processing published in the Journal of Advances in Acoustics and Vibration, 2013. He was the General Chair of the 2014 IEEE Ultrasonics Symposium in Chicago. He has served as the IEEE UFFC Ultrasonics Awards Chair since 2018. He served as the Ultrasonics Vice President for the IEEE UFFC Society (2014–2017). He has over 420 publications and has supervised 37 Ph.D. dissertations and 28 M.S. theses to completion. Dr. Saniie received the 2006 Outstanding Faculty Award for Excellence and Contributions to the Computer Engineering Program, and the 2007 Armour College of Engineering and the University (Illinois Institute of Technology) Excellence in Teaching Award. He is an IEEE Life Fellow for contributions to ultrasonic signal processing for detection, estimation, and imaging.