Palazzo del Cinema, home of the Venice Film Festival. The white building was designed in the Modernist style and inaugurated on 10 August 1937 on the occasion of the fifth edition of the Festival.

IUS 2022 plenary sessions will be held in the main theatre, Sala Grande, with more than a thousand seats, and where Film Festival projections are also broadcast each year. The hall, added during renovation works in 1952, will host part of IUS2022 exhibition spaces. IUS 2022 will also be holding sessions in the newest building of the Convention center, the Sala Darsena, which was completely renewed in 2014 and is located just behind the Palazzo del Cinema.

Palazzo del Casinò, house of one of the first Casinos in Venice since 1938 to early ‘90s. This monumental building, designed in the Rationalist style influenced by the Fascist architecture of the 1930s, was built in the record time of 8 months in 1938. The huge white marble façade hides elegant interiors with mosaics and artistic glass, originally designated as gambling rooms, dining rooms and cafés. The Casino was closed in the late 1990s, and since then the Palazzo has been used for hosting events and conferences.

Hotel Excelsior, the most historical and iconic hotel on the Lido, hosted in a Venetian palazzo enriched by exotic Moorish architecture, is located directly on the Lido sandy beach and is just a few steps away from the main conference center.

Its Stucchi Room, also rented for IUS 2022 scientific sessions, featured in Once Upon A Time In America starring Robert De Niro.

IUS 2022 conference will be hosted in three historical buildings on Lido di Venezia. 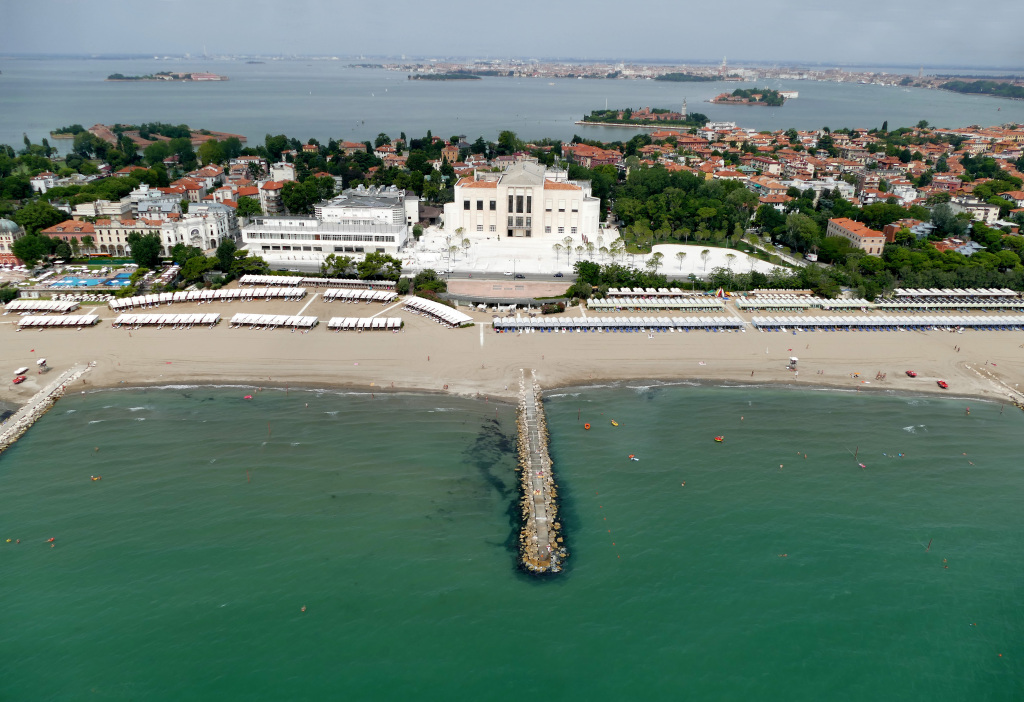 IUS 2022 will be held on the Lido, one of the main island of Venice.

Lido is a long thin strip of land between Adriatic sea and the lagoon of Venice. This isle remained sparsely inhabited until the second half of the XIX century when it became a major seaside resort for the cosmopolitan high society of the time. The XX century gave birth to the most prestigious hotels, the splendid Art Nouveau villas, the Venice Film Festival, and the Casino.

Today the Lido is an exclusive neighbourhood of the Venetian estuary, rich in history, art and nature. It is nowadays also known worldwide thanks to the International Film Festival of Venice that every year since 1932 brings to the isle movie stars, directors, and glamour.

During spring, winter and fall, out of the crowd and the chaos of the Festival and holidays, the Lido is a quiet and pleasant island just a few minutes from the magical charm of Venice. The Lido is a unique location that will welcome and astonish all IUS 2022 participants!

First edition of the Venice International Film Festival dates back to 1932 and is annually organized by La Biennale di Venezia, one of the world’s oldest exhibitions of art, created by the Venice City Council in 1893.

The aim of the Festival is to raise awareness and promote international cinema in all its forms as art, entertainment and as an industry, in a spirit of freedom and dialogue. The Festival also organises retrospectives and tributes to major figures as a contribution towards a better understanding of the history of cinema.

It is always attended by world renowned movie stars and director, and is considered one of the “Big Five” International Film Festivals, along with Cannes (France), Berlin (Germany), Sundance (US) and Toronto (Canada). The 79th edition of the Festival, will take place at Venice Lido from 31 August to 10 September 2022. More info can be found here.